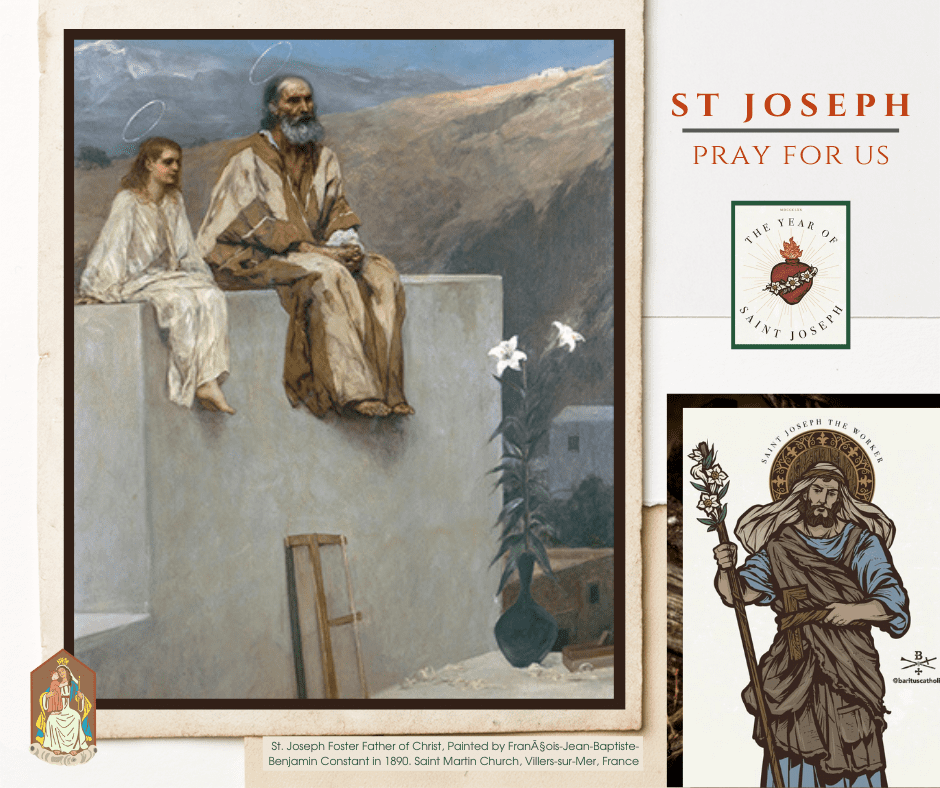 Devotion to St. Joseph is one of the choicest graces that God can give to a soul, for it is tantamount to revealing the entire treasury of our Lord’s graces. When God wishes to raise a soul to greater heights, He unites it to St. Joseph by giving it a strong love for the good saint.

At Saint John Lateran in Rome on 12/8/2020 (the day of the Solemnity of the Immaculate Conception of the Blessed Virgin Mary), Pope Francis declared that the coming year would be the year of St Joseph. He issued an Apostolic Letter, Patris Corde, truly worthwhile to read; you can read it here https://bit.ly/31b7eHH

Pope Francis describes beautifully how Joseph loved Jesus ‘with a father’s heart’. He gives two reasons for his choice of making 2021 the year of St Joseph: first, this year is the 150th anniversary of the Proclamation of St Joseph as Patron of the Universal Church; and second, because Pope Francis feels that St Joseph is an important figure for the pandemic times we are living in.

In most artwork of Saint Joseph, he is portrayed as a middle-aged man, with the carpenter’s saw at his feet. A lily is beside him, symbolic of his virginal marriage. In other paintings of him, he is shown holding baby Jesus. The painting is unique; here St. Joseph is simply sitting next to his Son. Side by side. Jesus is depicted in His early teens. They don’t look at each other, but… they are looking ahead together… they share the same horizon.

The painting shows a communion of destiny. Saint Joseph wasn’t simply an onlooker at the plan of God’s salvation. No, he was actively part of God’s plan of salvation… side by side with his Son.

Let us strive this year to grow closer to St. Joseph. Let us pray.

Hail, Guardian of the Redeemer and Spouse of the Blessed Virgin Mary! To you God entrusted His only Son; in you Mary placed her trust; with you Christ grew up to be a man.

Blessed Joseph, to us too, show yourself a father and guide us in the path of life. Obtain for us grace, mercy, and courage and defend us from every evil. Amen.

ON THIS PAGE are Intentional Ways to Grow Closer to St. Joseph & Details on Plenary Indulgences Available for the Year of Saint Joseph

Take part in the free virtual all-day conference hosted by the National Shrine of St. Joseph on 3/19th.

The all-day event is filled with prayer, insightful and inspirational talks, and the historic rededication of the shrine’s statue. It’s a powerful, grace-filled day, that has the following speakers just to name a few.

MOST REV. DAVID L. RICKEN, JCL, DD, BISHOP OF GREEN BAY Will speak to St. Joseph, Patron of the Universal Church and Protector of Home and Country.

REV. DON CALLOWAY MARIAN OF THE IMMACULATE CONCEPTION AND BEST-SELLING AUTHOR Will give a general overview of St. Joseph: His powerful titles, the importance of his role today, and why consecration matters.

DR. MARK MIRAVALLE – NOTED MARIOLOGIST AND AUTHOR OF NUMEROUS BOOKS INCLUDING “MEET YOUR SPIRITUAL FATHER.” Will explain why if there is division in the family or if you are praying for that future spouse or if you want to be a better husband or father, or even if you’re just praying for the conversion of a loved one… St. Joseph is your “go to” Saint.

RENOWNED EXORCIST REV. CHAD RIPPERGER Father Chad will talk about St. Joseph terror of demons, the role of St. Joseph as a protector and spiritual father, and his role in spiritual warfare and in the battle against evil. Learn why Satan hates the family, and why St. Joseph can be a special protector.

This short video is a good place to start or if you don’t have a lot of time. Sebastian Gomes takes a look at what the Bible reveals about St. Joseph and his understanding of God’s law. And it might be a good starting point, too, for a reflection. We might ask ourselves: “Where have I neglected to show mercy and used the ‘law’ as an excuse?” Because St. Joseph is nothing if not a good role model for us.

Here is Patris Corde, the apostolic letter written last year by Pope Francis for the Year of St. Joseph. 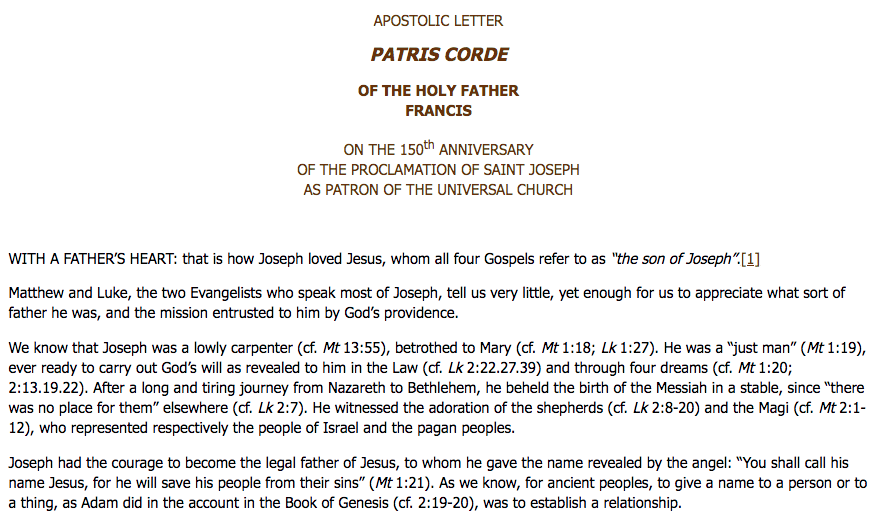 Here is Redemptoris Custos an apostolic exhortation written by Pope St. John Paul II in 1989, in honour of the 100th anniversary of Quamquam Pluries. 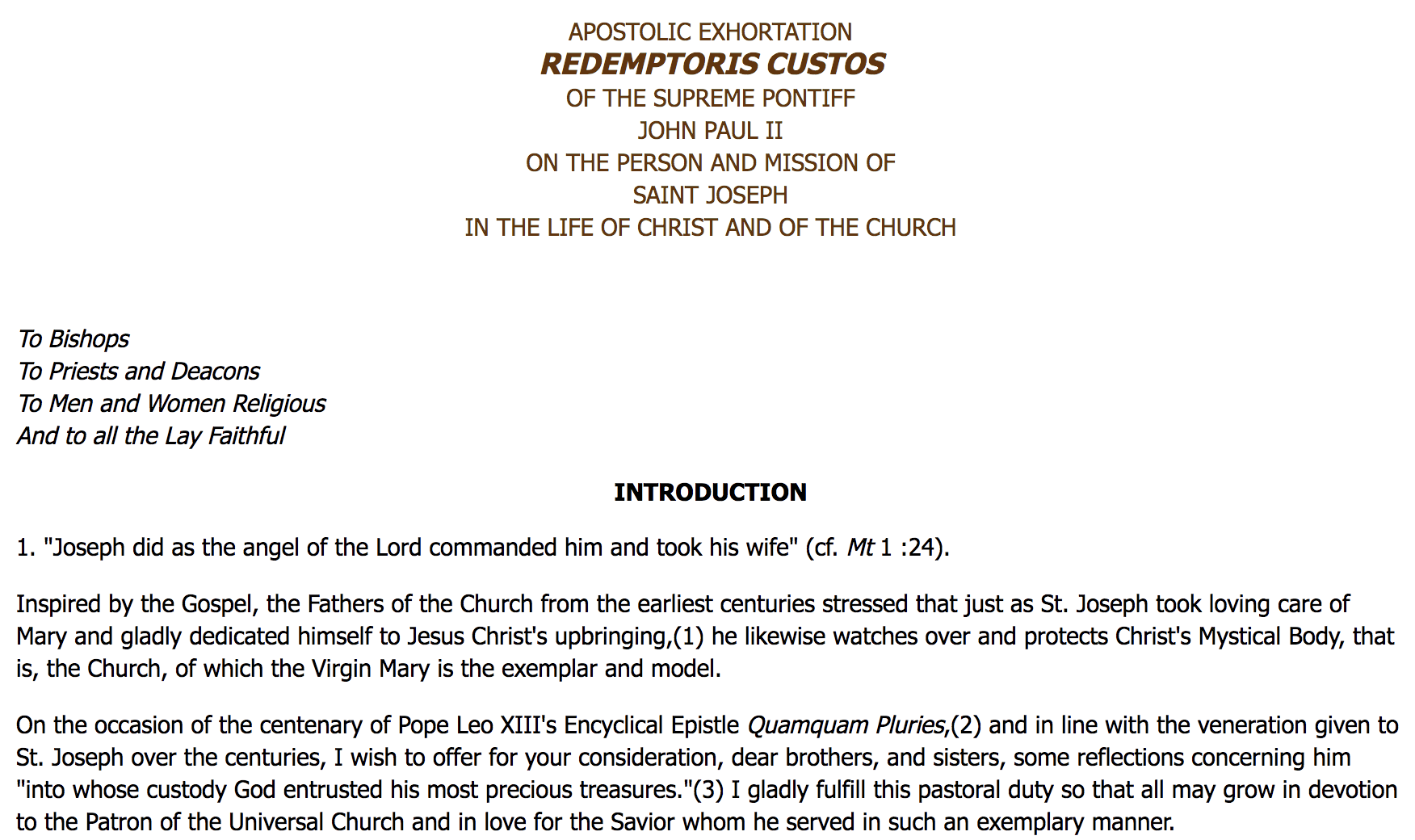 Here is Quamquam Pluries was written by Pope Leo XIII in 1889. It’s an encyclical, but don’t worry, encyclicals back then were not quite as long as they are now. In fact, this is the shortest of the three documents. 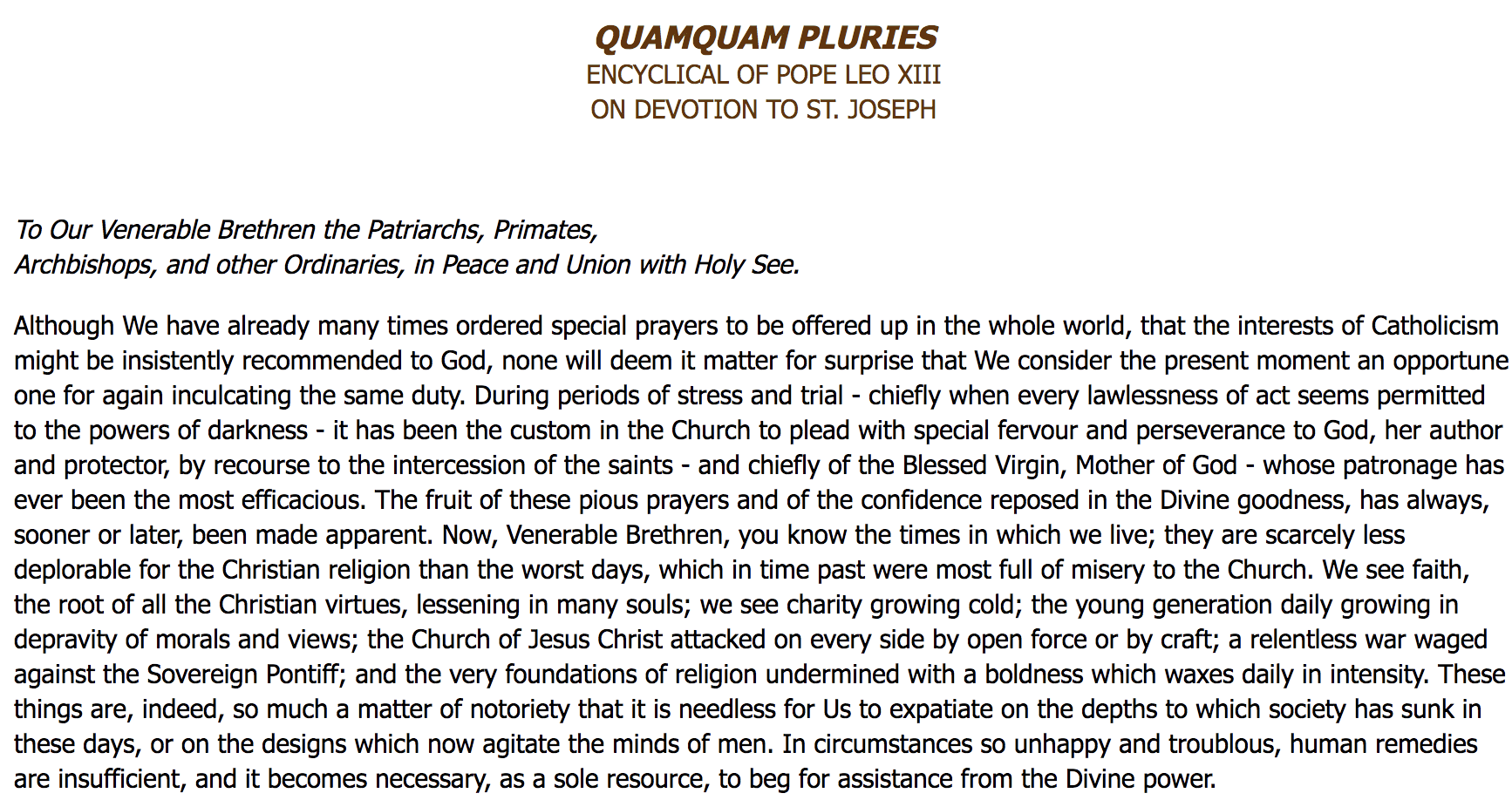 CONSECRATE YOURSELF TO ST. JOSEPH

We will pray the consecration prayer at all the Masses the weekend of 3/20 & 3/21.  You can also do so through Fr. Donald Calloway’s book “Consecration to St. Joseph” https://bit.ly/3s31paY

Drawing on the wealth of the Church’s living tradition, Fr. Donald Calloway, MIC, calls on all of us to turn to St. Joseph, entrust ourselves, our Church, and our world to our spiritual father’s loving care, and then watch for wonders when the Universal Patron of the Church opens the floodgates of Heaven to pour out graces into our lives today. 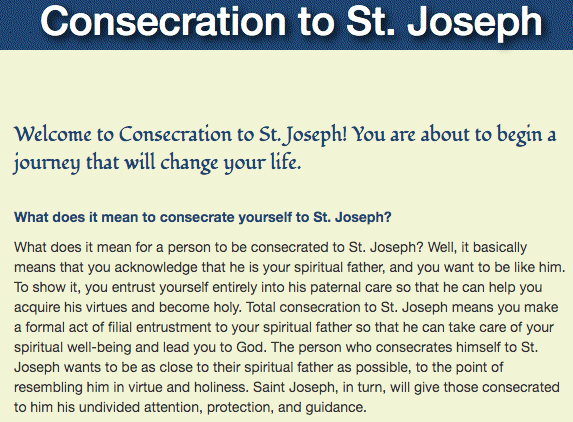 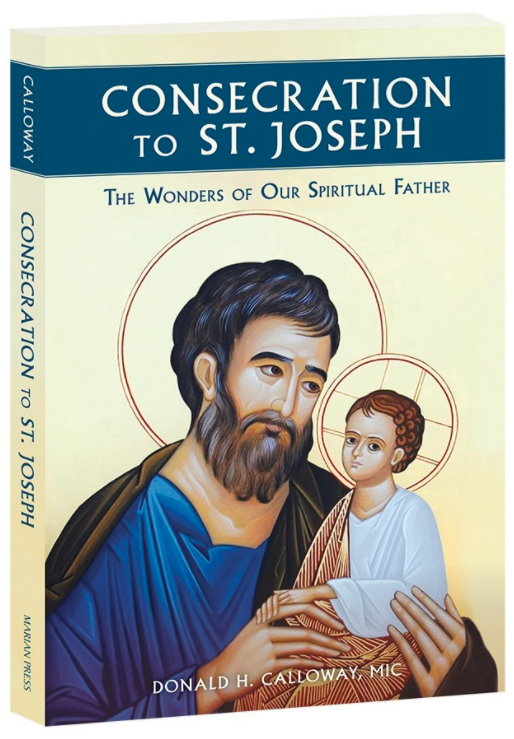 It is nine days of prayer where each day focuses on a particular aspect of Saint Joseph’s person, contemplating him as a husband, as a father, as one persecuted, as a man of trust, of purity, work, and silence, as one who died a holy death, and as the Universal Patron of the Church.

Each day follows the same structure: an original hymn, a reading from Scripture, a meditation from a particular saint or spiritual writer, followed by a set of intercessions.  It concludes with Pope Francis’ prayer to Saint Joseph from “Patris Corde” 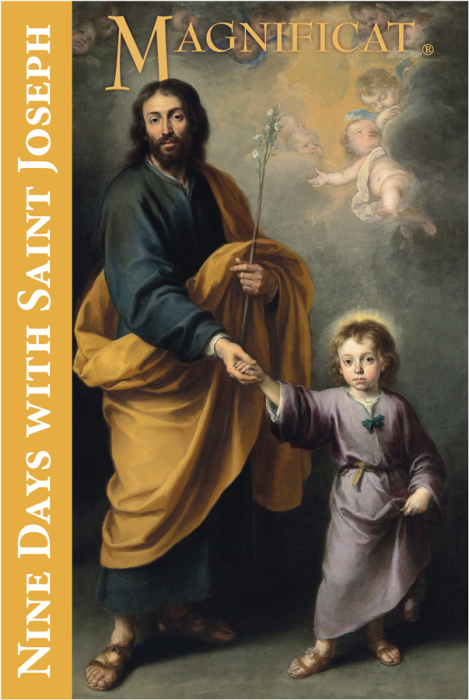 WATCH THE FOLLOWING ON FORMED 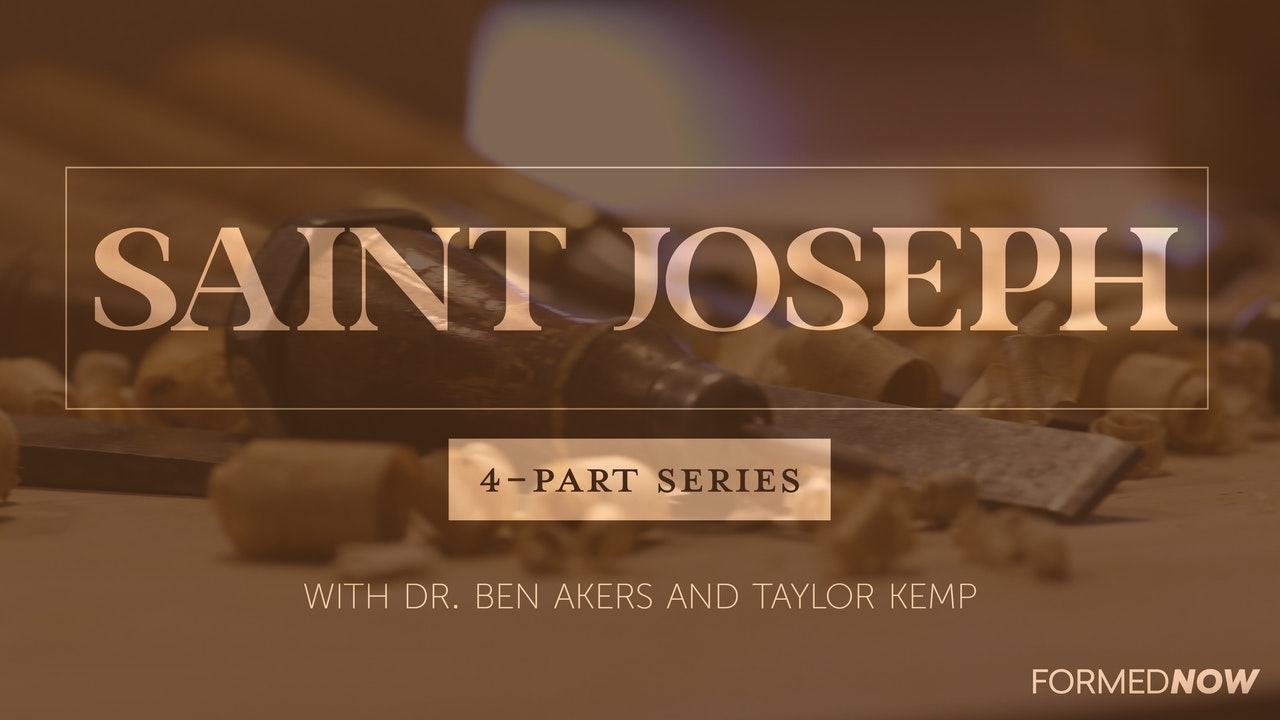 Watch the film “Joseph of Nazareth: The Story of the Man Closest to Christ

The first feature film ever on the story of St. Joseph, who was a carpenter, the husband of Mary, and the foster father of Jesus Christ. Scripture tells us that St. Joseph was a “just man” and that God gave him the most daunting task ever asked of a man–to be the husband of the woman who would give birth to the Messiah and the father and protector of this Holy Family. He would be the man closest to Christ. 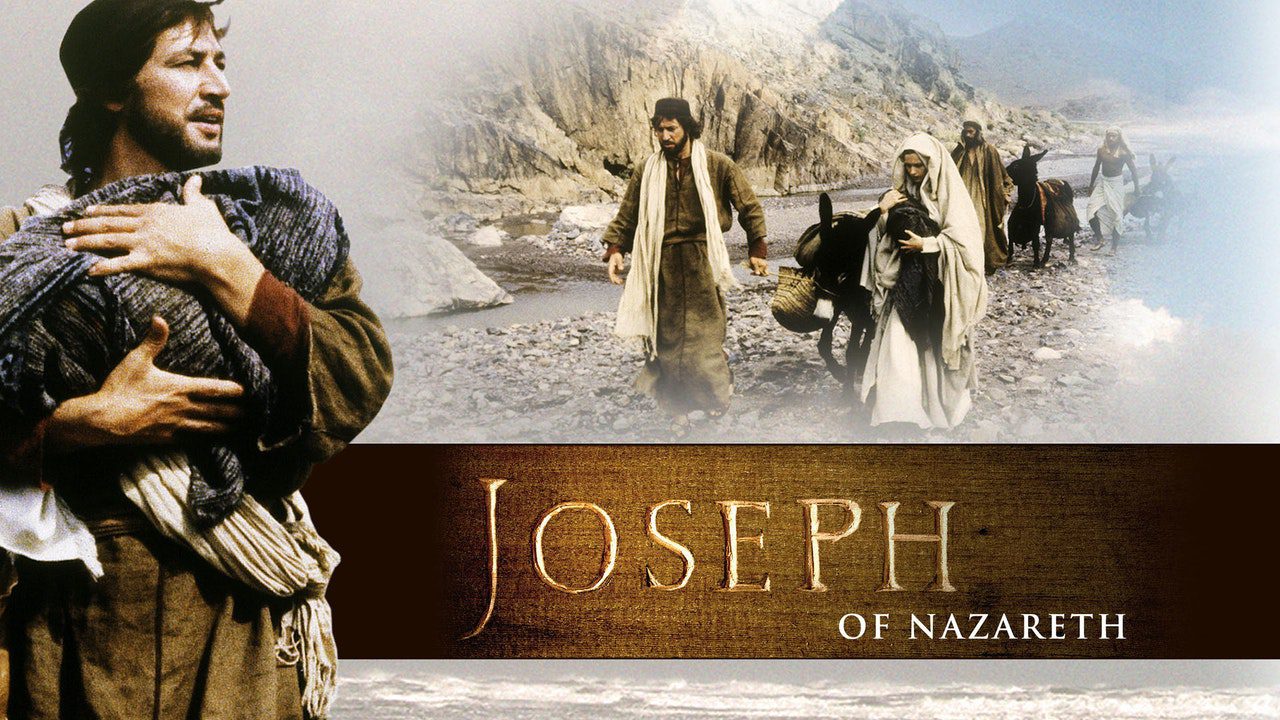 If you’re going to spend time with St. Joseph, why not also get to know one of his best friends? This film is about St. André Bessette, who brought healing to hundreds of people through the intercession of St. Joseph and built the massive Oratory of St. Joseph in Montreal – the largest church in Canada and the largest one anywhere dedicated to St. Joseph. Perhaps learning about this humble saint’s devotion to our Church’s patron might provide an inspiration for your own devotion. 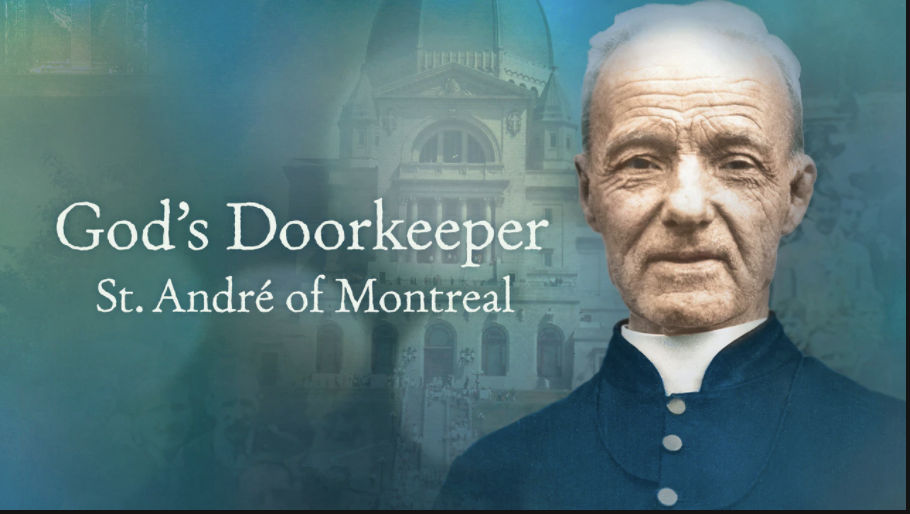 On the myParish, check out the ‘Yr of St Joseph’ button which has St. Joseph Reflections.

Each day throughout this year, there will be reflections posted by priests.

In Italy, for the feast of St. Joseph they have a special treat called zeppole di San Giuseppe, a wonderful custard(or cream)-filled pastry topped with a cherry. If you’re lucky enough to live in Italy or in a city with an Italian bakery, you can just buy one (or several!). If not, or if you’re handy in the kitchen, why not try making them yourself?

In any case, this adorable Italian nonna is a joy to watch. She even sings a prayer while she’s cooking: O San Giuseppe, prega per me! (O St. Joseph, pray for me!) 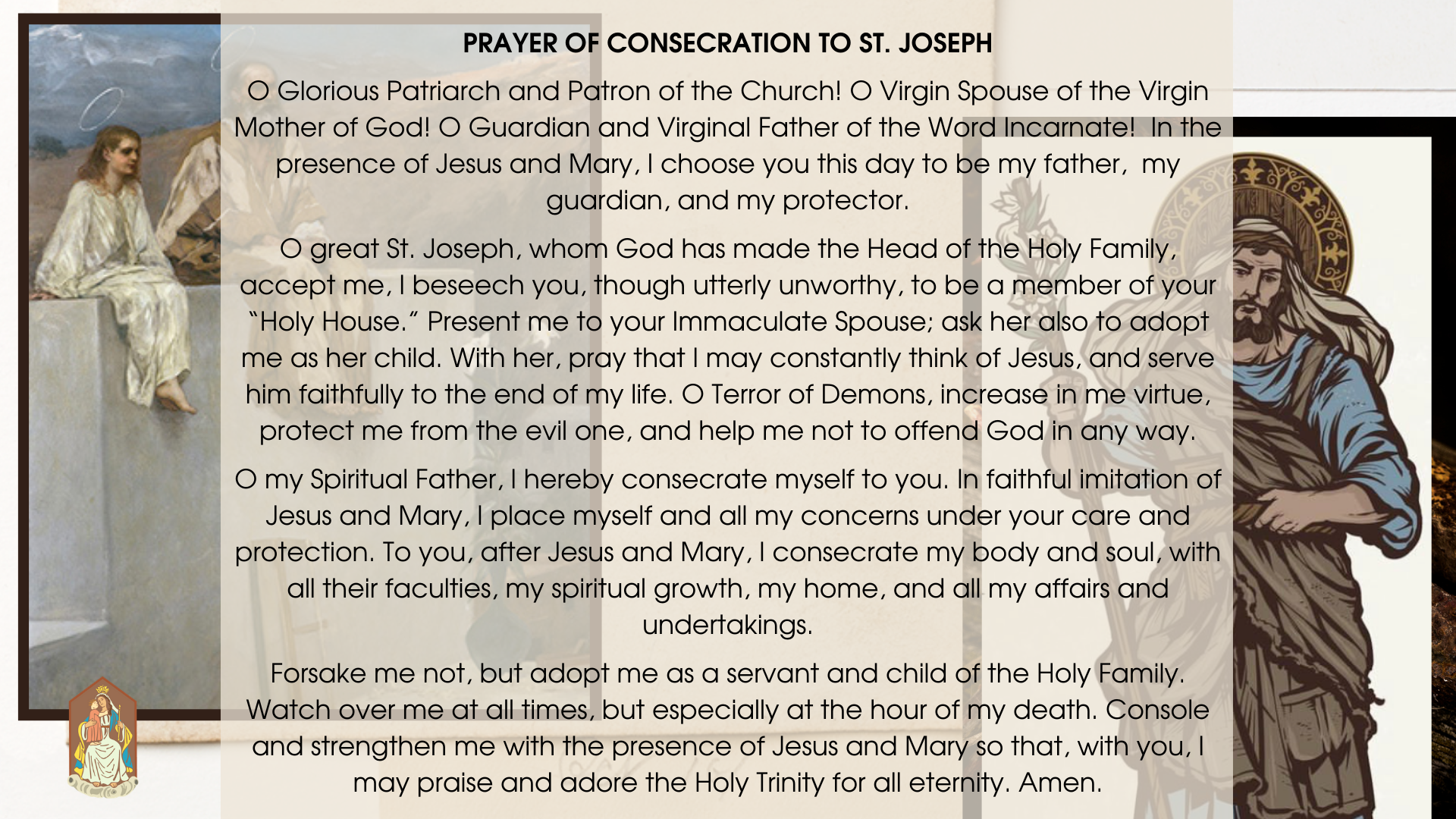 Plenary Indulgences Available for the Year of Saint Joseph

The Apostolic Penitentiary issued a decree on December 8, 2020, formally announcing the decision of Pope Francis to celebrate the Year of Saint Joseph through December 8, 2021. Special opportunities to receive a plenary indulgence were also included, subject to the usual conditions: sacramental confession, reception of Holy Communion, prayer for the intentions of the Pope, and total detachment to all sin, including venial sin.

Due to the ongoing coronavirus (COVID-19) pandemic, the Holy See made provision in its decree that persons who are currently unable to go to Mass or confession because of public health restrictions may defer reception of those two sacraments until they are able to do so. Those who are sick, suffering, or homebound may also receive the plenary indulgence by fulfilling as much as they are able and by offering their sorrows and sufferings to God through Saint Joseph, consoler of the sick and patron saint for receiving a good death.

The following prayers and activities have been enriched with a plenary indulgence: