So extraordinary were the mighty deeds God accomplished at the hands of Paul that when face cloths or aprons that touched his skin were applied to the sick, their diseases left them and the evil spirits came out of them. 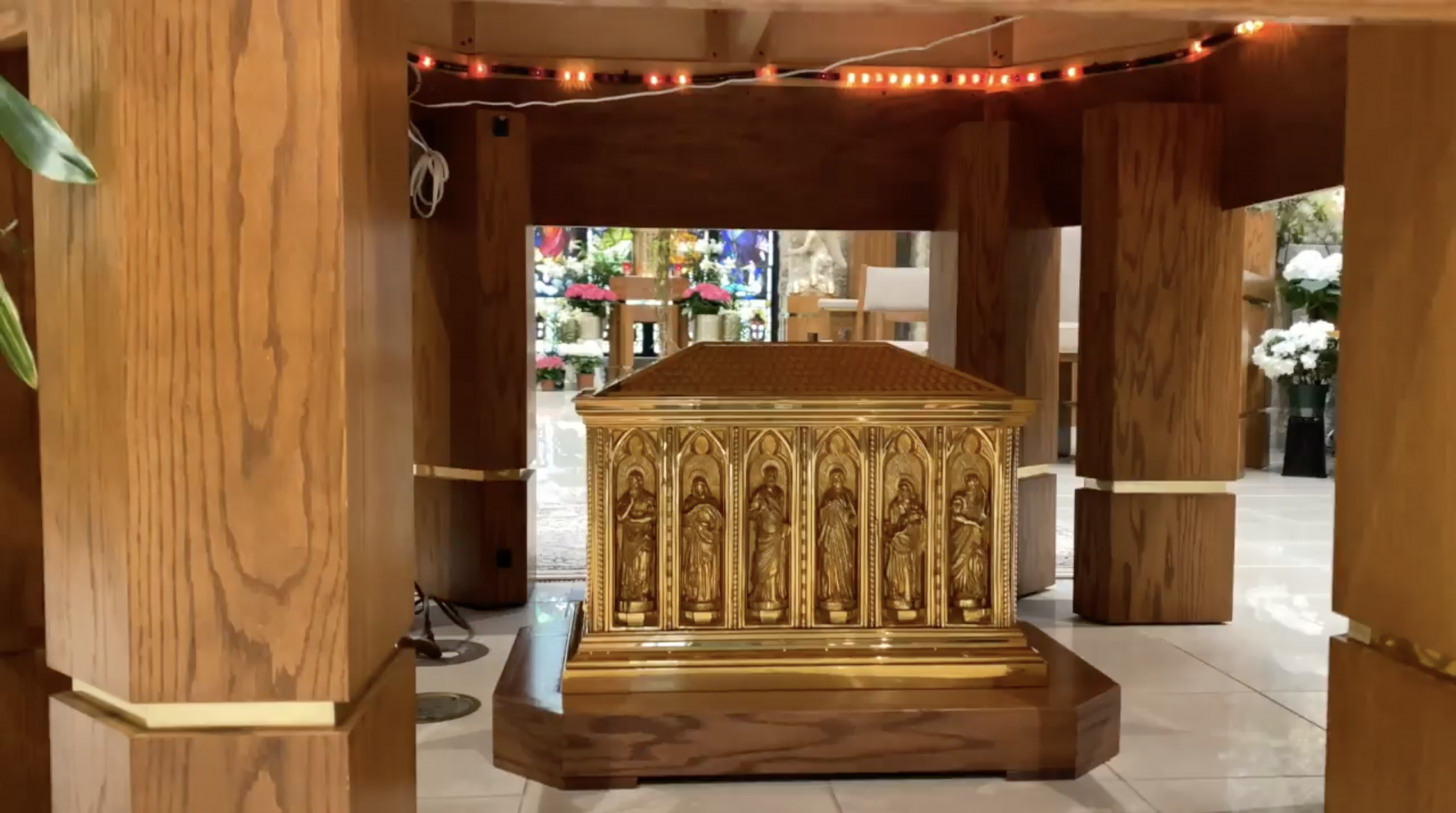 Beneath the altar is a golden reliquary, which simply means a container or shrine in which sacred relics are kept.  The word relic comes from the Latin relinquo, literally meaning I leave, or I abandon. A relic is a piece of the body of a saint, an item owned or used by the saint, or an object which has been touched to the tomb of a saint.  As Catholics we don’t worship the relics.  We venerate the relics of the Saints because of the way they loved; the way they lived their lives inspire us.  Clothing and personal effects of the Saints were also enshrined stemming from the widespread belief since St Paul in Acts 19:11 through the centuries of the early Middle Ages, that the wonder-working power of God through the Saint was to be found not only in the entire body but also in every part of it and in objects that had been in contact with his person.  More information on the 3 types of relics and scriptural resources are at the end of the page.

The custom of putting relics under altars goes back to the time of the catacomb when Mass was often offered over the tomb of a Saint, of martyrs, because they gave their life as a testament that Jesus Christ died and rose from the dead; they wouldn’t denounce Jesus or their faith in Him and were killed for it.

Our beautiful reliquary is a memorial gift from Christine and Bill Holbrook in memory of Bill’s brother Daniel.  We are grateful to the Holbrook family for such an incredible gift. 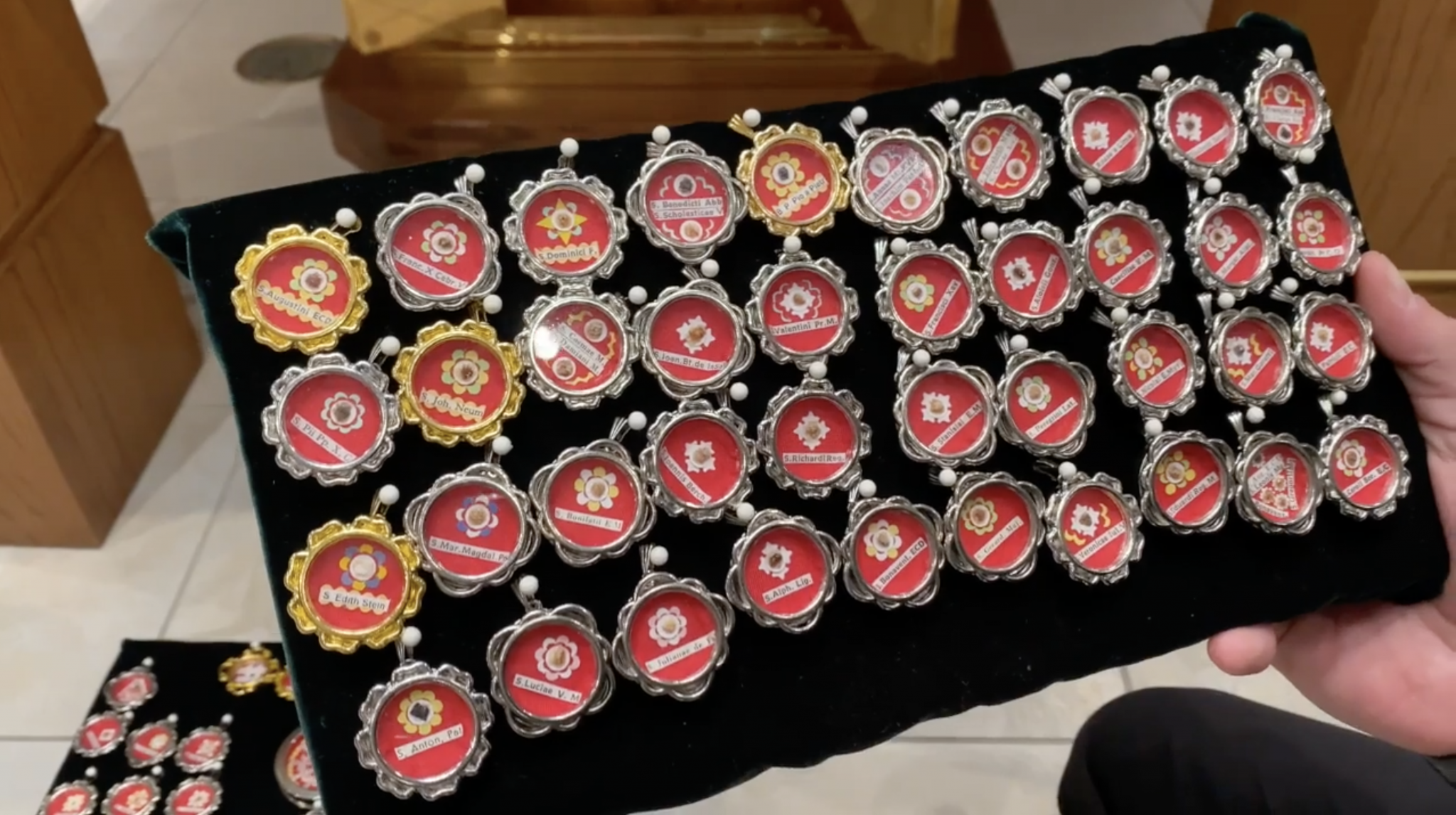 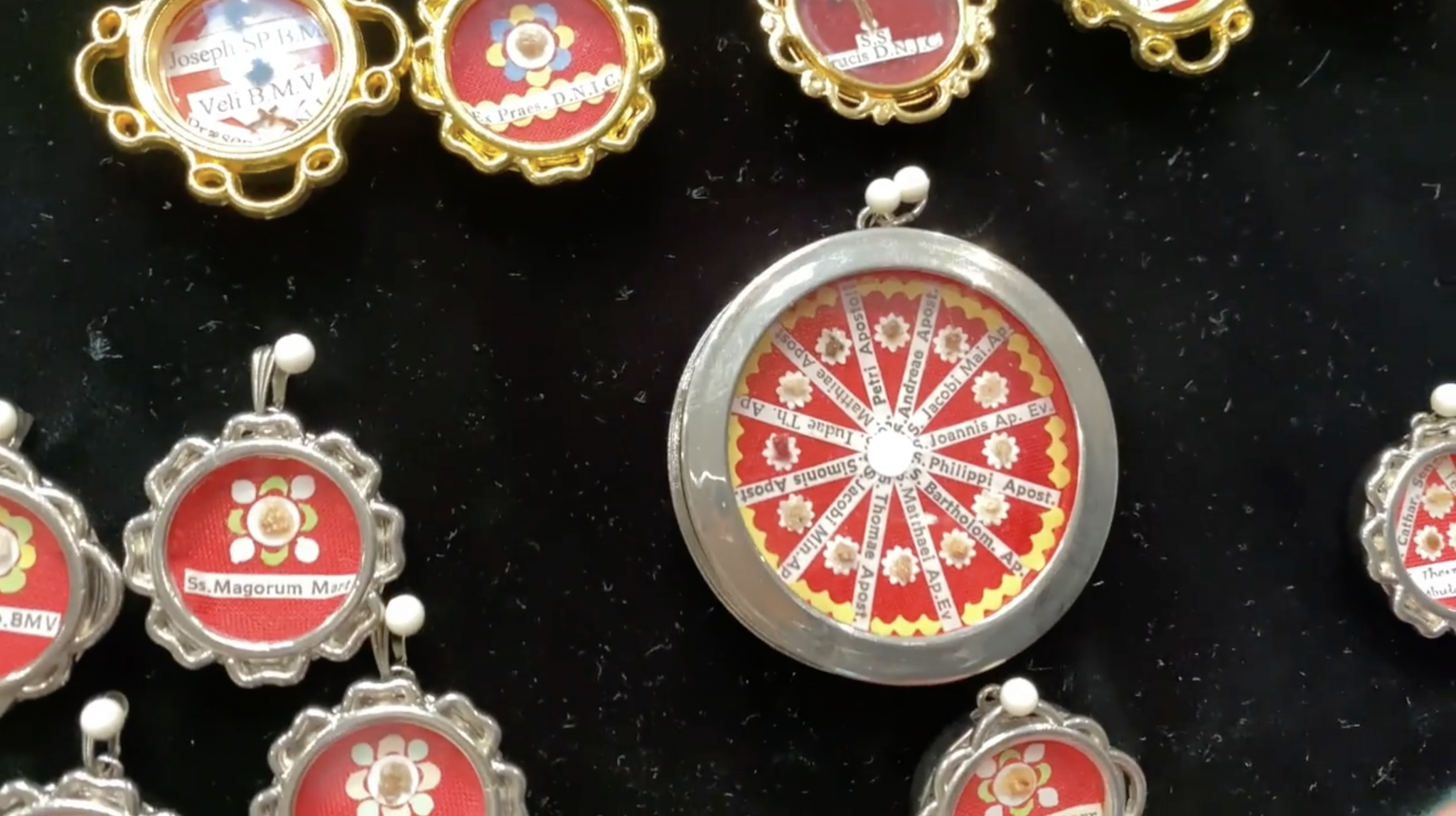 Isn’t the veneration of relics optional for Catholics? Must the Catholic faithful really esteem the bodies of the saints?

Once and for all, the Council of Trent (16th century) responded to the claims of the reformers that both the veneration of the saints and their relics is contrary to Sacred Scripture. The Council taught: Also the holy bodies of the holy martyrs and of the others who dwell with Christ . . . are to be honored by the faithful.  There are several scriptural passages that support the veneration of relics. For example,

The relics of the saints and their veneration is just another in the long line of treasures which Jesus Christ has given to His chaste bride, the Church. These relics summon us to appreciate more profoundly not only these heroes who have served the Master so selflessly and generously, but especially the love and mercy of the Almighty who called these His followers who are living a blissed out unending life in His eternal kingdom.

Let’s also pause for a moment.  Perhaps in our technological age, the whole idea of relics may seem strange.  Remember, all of us treasure things that have belonged to someone we love– a piece of clothing, another personal item, or a lock of hair.  Those “relics” remind us of the love we continue to share with that person while he was still living and even after death.  We are very proud to say, “This belongs to my mother,” for instance.  Our hearts are torn when we think about disposing of the very personal things of a deceased loved one.  Even from an historical sense, at Ford’s Theater Museum for instance, we can see things that belonged to President Lincoln, including the blood stained pillow on which he died.  With great reverence then, we treasure the relics of saints, the holy instruments of God.  In all, relics remind us of the holiness of a saint, of a hero, and his cooperation in God’s work; at the same time, relics inspire us to ask for the prayers of that hero and to beg the grace of God to live the same kind a faith-filled life.

Prayer to Our Lady of Mercy

Blessed Virgin Mary, who can worthily repay you with praise and thanks for having rescued a fallen world by your generous consent! Receive our gratitude, and by your prayers obtain the pardon of our sins. Take our prayers into the sanctuary of heaven and enable them to make our peace with God.

Holy Mary, help the miserable, strengthen the discouraged, comfort the sorrowful, pray for your people, plead for the clergy, intercede for all women consecrated to God. May all who venerate you feel now your help and protection. Be ready to help us when we pray, and bring back to us the answers to our prayers. Make it your continual concern to pray for the people of God, for you were blessed by God and were made worthy to bear the Redeemer of the world, who lives and reigns forever.