Hold fast to the traditions you were taught, either by an oral statement or by a letter of ours.

We’ve learned so much through the questions you asked!  Thank you for submitting them.

Let’s continue to learn together as Father James answers more of your questions.

SUBMIT THEM AT THIS LINK

Hope to see you at the next AMA where Father James and Zara discuss whatever questions you may have about Catholicism, prayer, the Bible, Church happenings, and your very own local priest!

2:35 Welcome to the monthly AMA with Father James.

4:44 Can you speak about what the sin against the Holy Spirit is?

7:08 How do you respond when people say the Holy Trinity is not in the Bible?

10:12 Why doesn’t the Church say no to the vaccine if it contains a baby’s fetus, cells, etc?

17:42 I want to rephrase a question I submitted.  Is it a sin not to take the vaccine, as in Not taking good care of my body, not caring about others, possibly shortening my life?  (I am concerned about long-term side effects which may show up later.  It appears safe now, but no one really knows what effects it will have on your body 2 – 5 years from now.  It is not like all the other vaccines that have been made previously.)

22:42 Bishop Barron said young people polled said they leave the Church because they didn’t get answers to their questions. My daughter raised 2 to me: 1) the questioning of the story of Jonah being swallowed by a whale- how can this possibly be true? 2) Noah filling an arc with 2 of every animal- how can this possibly be true? Please help me with a response to these and maybe a reference for where I can point her towards to help with other questions like these.

28:18 The Biblical Institute of the Diocese of Joliet; a Bible School in our backyard!

39:11 During the Mass before the Priest consecrates the Body and Blood of Christ why does a Eucharistic Minister get the host from the Tabernacle if the Priest is the one who is most Holy enough to hold Christ?

42:35 Shouldn’t everyone be allowed to receive communion as long as they believe that the host is truly the body and blood of Christ? Despite lifestyle choices or circumstances or any other disqualifier?

46:39 Regarding reconciliation, non-Catholics don’t understand why we need to confess our sins to a priest. I’ve explained that it is a sacrament in which we earn God’s graces and that it became the apostle’s job to forgive sins. How do we answer them when they say they can confess directly to God and how do I know they aren’t earning the same graces?

51:50 If the main purpose is to receive the Lord when we come to Mass how come we can’t receive communion every time we go to Mass?

53:25 Can you explain why small amount of water is mixed with the wine before consecration?

Was your question one of the ‘great’ questions Father James answered? Below are the time stamps for each question or check out the YouTube link’s description which takes you directly to each question.

10:00 Why does the Church hire people who aren’t Catholic?

11:07 Why don’t we have a Linen Cloth for our Tabernacle? The polyester cloth has been there for 20 years and it’s yellow, not white anymore.

12:09 What is the incense that the church uses during certain masses? Shortage of incense in the future article https://www.nationalgeographic.com/animals/article/frankincense-trees-declining-overtapping

13:23 The transcendent reality of the Mass.

16:28 I’d like to know about how they are supporting the community and victims of church scandals, for sure. And is there restorative education happening within the clergy to make sure it doesn’t happen while also unpacking why scandals happen at all? Where does that oppressive and abusive power come from?

21:30 I know that communion represents the last supper, but what about the rest of the mass?

28:05 At the beginning of Mass Father asks to call to mind our sins. Are we forgiven of them? Also, why are we allowed more time? Thank you!

31:23 Why does Father James hold your 3 fingers together during the prayers at Mass?

33:48 How often do you and Father Don receive emergency calls such as urgent requests for the anointing of the sick, etc.?

38:22 I know you like sports and exercise.  Do you practice Yoga?  Part of the answer https://relevantradio.com/2020/03/is-yoga-okay-for-catholics/

49:45 My grandmother and mother “beat” their chest 3 times when the Eucharist is offered and again when the chalice of wine is lifted.  It coincides with the ringing of the handbells.  I asked my mother once why she does it and she said she just always has.  Do you know the origin of this gesture?  I would like to do the same but feel I should know why it is done.  Many thanks!

1:02:41 I know this is sort of random, but this question popped in my head during mass last Sunday. What happens if a priest is a recovering alcoholic, but needs to drink the consecrated blood (wine)? Does he have to drink it or can he get someone else to do it for him?

1:08:17 Will you ever consider having ad orientem Mass or Latin mass at our church?

Part 2 of the AMA

Was your question one of the ‘great’ questions Father James answered? Below are the time stamps for each question or check out the YouTube link’s description which takes you directly to each question.

15:33 – During the Mass a list of saints’ names is read. How were the names chosen and does the list of saint’s names ever change?

17:20 – There was a beautiful ceremony when seminarian Tom Logue became a Deacon. Is this ceremony just for a future priest or do all men that become Deacons have the same?

18:50 – At the ceremony for Tom Logue becoming a Deacon there were 2 priests/seminarians wearing a shawl. Were they carrying the Host?

20:58 – Who was your favorite teacher at Benet Academy?

21:35 – Can a priest choose which parish he wants to be transferred to or does the Bishop make the decision?

24:10 – What does the church believe about non-Christians and salvation?

32:40 – Why don’t they show people getting communion on the live stream?

34:19 – What is the difference between thinking of committing a sin vs. committing the sin and going to confession after the sin? Example: thinking of robbing a bank then actually doing it and confessing after the fact.

Code of Canon Law #917 stipulates, “A person who has received the Most Holy Eucharist may receive it again on the same day only during the celebration of the Eucharist in which the person participates, with due regard for the prescription of Canon 921, §2.” which says, “Even if they have received Communion in the same day, those who are in danger of death are strongly urged to receive again.”

39:52 – Why does mass attendance on Sunday matter? Can’t we just go during the week on the day that’s most convenient? What if we have to work on Sunday?

Canon 919. §1. A person who is to receive the Most Holy Eucharist is to abstain for at least one hour before holy communion from any food and drink, except for only water and medicine.

56:12 – Did God create more people than Adam and Eve? What about the other people in Genesis?

Catechism of the Catholic Church 2477 Respect for the reputation of persons forbids every attitude and word likely to cause them unjust injury. He becomes guilty:

– of rash judgment who, even tacitly, assumes as true, without sufficient foundation, the moral fault of a neighbor;

– of detraction who, without objectively valid reason, discloses another’s faults and failings to persons who did not know them;

– of calumny who, by remarks contrary to the truth, harms the reputation of others and gives occasion for false judgments concerning them.

1:06:02 – Describe the classwork of the subject of Confession in seminary, other than logistics?

1:12:15 – Describe the moment before and after consecrating bread and wine at Mass.

1:14:21 – I have heard that you Fr James have recently become the Spiritual Director for Waterleaf. That is wonderful to hear. What type of duties and services will you be doing at Waterleaf?

1:20:05 – Are we consecrated to St Joseph after reading the consecration prayer at mass on his feast day? I was planning to use Father Calloway’s book to follow the 33-day program. Did we bypass this?

1:20:56 – What can parishioners do to help you in your ministry, Father James? What can we do to help Father Don?

1:24:50 – If God is merciful why do some babies suffer who aren’t yet able to understand faith? Basically, why do bad things happen to good people? Also, do you believe an atheist who is a kind caring person their entire life can go to heaven?

1:33:55 – Why is the door to the Holy Eucharistic Chapel still locked?

1:37:00 – For college students: How can we keep a close relationship with God while continuing to do well in our studies, keep up with homework, our friendships, etc? Can you give some tips for this?

1:41:55 – My daughter-in-law and her brother were baptized by their grandmother in her bathtub against their parent’s wishes. Does it count?

1/ the parents or at least one of them or the person who legitimately takes their place must consent;

2/ there must be a founded hope that the infant will be brought up in the Catholic religion; if such hope is altogether lacking, the baptism is to be delayed according to the prescripts of particular law after the parents have been advised about the reason.

1:48:45 – My daughter has a boyfriend who belongs to a different Christian religion. What should I tell my daughter if the time comes, if her boyfriend asks her to join his religion?

Catholics can get a dispensation to get married outside of the Catholic Church (e.g. in a protestant ceremony). It requires some wedding preparation still and signing a few documents basically saying you won’t reject the Catholic faith as a result.

Part 1 of the AMA

Was your question one of the 10% of questions Father James answered? Below are the time stamps for each question or check out the YouTube link’s description which takes you directly to each question.

16:45 The slaughter of the Amalekites in the Old Testament: Trent Horn on Pints with Aquinas: https://www.youtube.com/watch?v=FPyjIMn5-yg

30:18 How do we balance between relying on God and relying on ourselves?

34:53 Do you have any advice for a young woman considering a calling to the religious life?

53:34 Why do the saints seem to live the shortest and suffer the most in living their faith?

57:15 What does the Church teach about the TV series The Chosen?

1:03:37 What do I do if a close relative/friend invites me to their same-sex ceremony?

Code of Canon Law 280: “Some practice of common life is highly recommended to clerics; where it exists, it must be preserved as far as possible.”

Code of Canon Law 533 §1: “A pastor is obliged to reside in a rectory near the church. Nevertheless, in particular cases and if there is a just cause, the local ordinary can permit him to reside elsewhere, especially in a house shared by several presbyters, provided that the performance of parochial functions is properly and suitably provided for.” 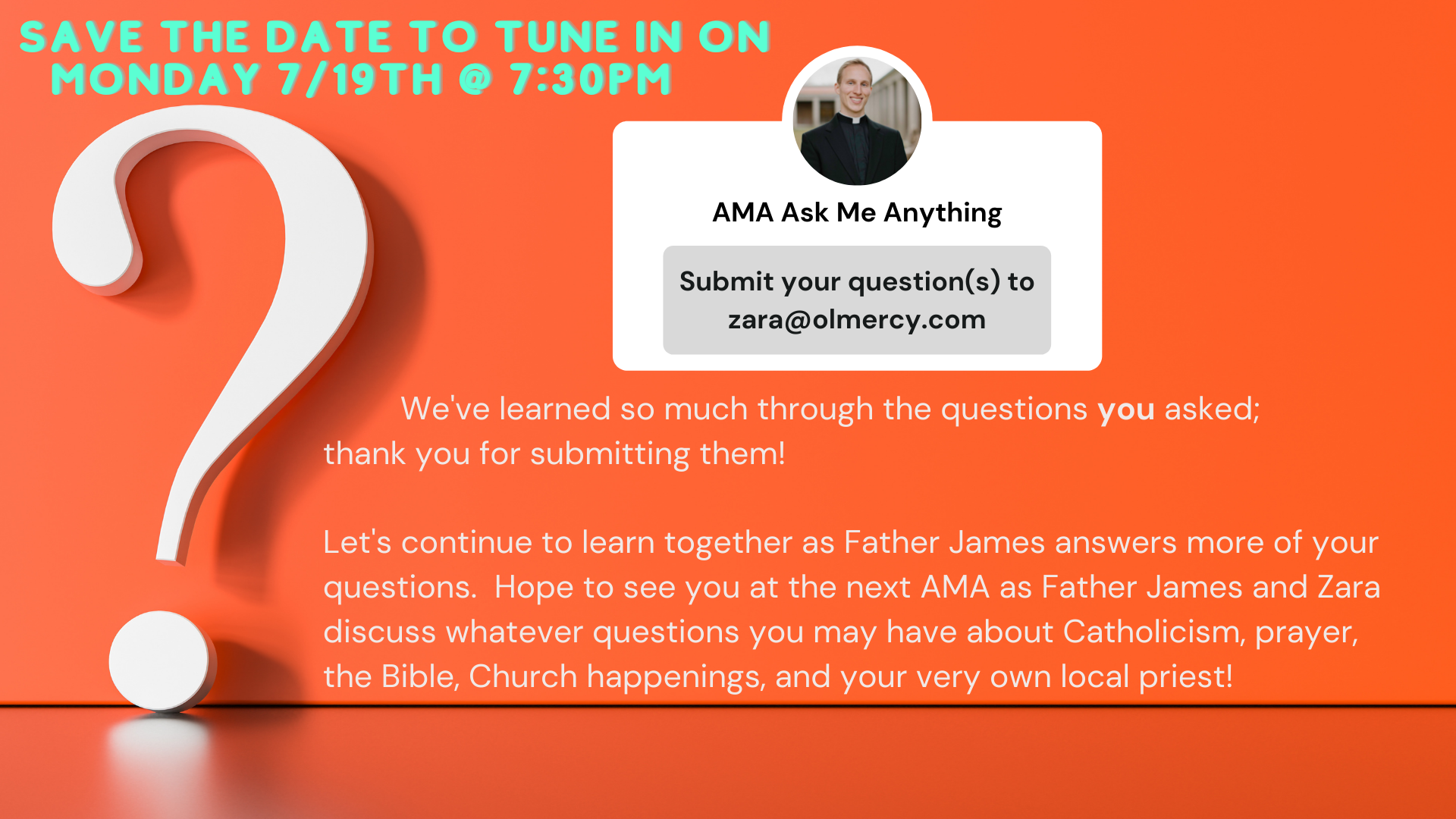