On August 14th, 2018, Pennsylvania released their Grand Jury Report on priest abuse.  In the report it showed that over 301 priests had abused over 1,000 children over the span of 70 years. It was an atrocity and another stain on the Church’s leadership in the United States. The people of God, who trusted their priests to be good shepherds like Christ, saw that some of their leaders were wolves in priests’ clothing.  For my own priesthood, it was quite the challenge. I remember preaching on August 19th of that year in tears because of the horror of these sins and the pain that was caused, while at the same time realizing how the stain of these atrocities would be assumed of me and my own priesthood.  I did my best in trying to reaffirm the people of God of the need for the Church to continue to root out this evil as best as she could.

Shortly after that Pennsylvania report, Lisa Madigan, the attorney general for Illinois at the time, requested all diocesan files in Illinois to be turned over to their office as well. She too wanted to make sure that nothing was being hidden or covered up by the Dioceses in Illinois. I’m bringing all of this up because I was recently told in a deanery meeting with the other local priests that the Illinois AG report will be released shortly.  Of course, I have yet to see the report myself, but I wanted to once again reaffirm the people of God, especially all of you here at Our Lady of Mercy, that the Diocese of Joliet, along with myself as your pastor, will always do our best to protect the people of God–most importantly our children and vulnerable adults.

In August, Bishop Hicks wrote a wonderful article on the 2002 Charter for the Protection of Children and Young People: https://www.dioceseofjoliet.org/bishop/content1.php?secid=110.  In the article, he talks about the steps taken by the United States Conference of Catholic Bishops (USCCB) and our own diocese in an effort to eradicate sexual abuse within our churches.  This includes making all clergy, parish staff, and volunteers undergo criminal background checks, train as mandated reporters, and learn how to be able to prevent, spot, and report sexual abuse.  All allegations are required to be reported directly to civil authorities and credible, substantiated claims lead to the immediate removal of all from active ministry, including priests.  One encouraging quotation from our bishop’s column stated:

the number of credible allegations reported against clergy nationwide has decreased from a high of 162 in the five-year period from 1970-1974 to four in 2021. www.usccb.org/offices/child-and-youth-protection/audits

Four cases are still too many, but I believe that the Church is continuing to make great strides in eradicating child sex abuse within her leadership. I saw this in my own time in seminary formation where I had the opportunity to work with men discerning the vocation to the priesthood.  From the time I went through seminary to now, the Church has continued to improve and strengthen its measures in protecting the Church from further abuses.  Currently, any man considering a vocation to the priesthood must undergo an extensive psychological evaluation before even being accepted, with another evaluation being conducted during his time in seminary. On top of that, each seminarian receives yearly evaluations which look in-depth not only into his academic and spiritual life, but also into his human and pastoral relationships. These measures, along with many others, have the capacity to quickly flag any potential issues in a candidate for the priesthood.

Let us continue to pray for the Church and her success to eradicate such sin within her leadership; let us pray for those who have been abused by leaders of the Church; and, as hard as it is to say, but as Christ compels us, let us pray also for those who have committed or sought to cover up these heinous acts of abuse—that our Church may be freed from the scourge of such scandals and be flooded with the healing and selfless love of Christ.

Enclosure: Q and A for the Upcoming Report on Sexual Abuse of Minors in the Catholic Church in Illinois from the Office of the Illinois Attorney General

Why is the Illinois attorney general issuing this report?

Current Illinois Attorney General Kwame Raoul is carrying out the work initiated by his predecessor, Lisa Madigan, who released a preliminary report in December 2018. That report may be found here: https://illinoisattorneygeneral.gov/pressroom/2018_12/Catholic_Church_Preliminary_FindingsU pdate121918.pdf

Madigan, along with several other attorneys general across the country, initiated an investigation into Catholic clergy sexual abuse against minors in August 2018. These inquiries came on the heels of the release that same month of a two-year grand jury investigation by the office of the Pennsylvania attorney general into sexual abuse of minors by clergy of the Catholic Church in that state. That report may be found here: https://www.attorneygeneral.gov/report/

Why has it taken so long for the Illinois attorney general’s office to issue the final report?

Raoul took office in January 2019, and a little more than a year later, the coronavirus pandemic began, prompting attention to be shifted to navigating the pandemic. Additionally, in the midst of the pandemic, Raoul’s office experienced a serious data breach, which caused further delays in the investigation.

When will the report be issued?

Representatives of the Illinois attorney general’s office have indicated to attorneys representing the six Catholic arch/dioceses in the state to expect the report this fall.

What will be in the report?

Representatives of the Illinois attorney general’s office have indicated to diocesan attorneys that the report will highlight areas of deficiency in reporting or handling of credible allegations against clergy.

Have investigators from the attorney general’s office visited the Diocese of Joliet?

Yes, on several occasions. They have also visited the other five arch/dioceses in Illinois: Chicago, Rockford, Springfield, Peoria and Belleville. The Diocese of Joliet has been very cooperative with the attorney general’s office and has complied with all requests for information.

How should I prepare my parishioners for the report?

The following background may be helpful.

In early 2002, The Boston Globe published results of an investigation into sexual abuse of minors by priests in the Archdiocese of Boston. In June 2002, the U.S. Conference of Catholic Bishops met in Dallas for its regular meeting and established the Charter for the Protection of Children and Young People.

Known as the Charter, this document sets out a mandated blueprint for dioceses and eparchies to follow to create a safe environment for children and vulnerable adults in our churches, schools and activities, as well as to receive and respond to allegations of sexual abuse of minors by clergy.

Bishop Hicks wrote about the 20th anniversary of the Charter in his August 2022 column, outlining the steps the Diocese of Joliet follows to ensure a safe environment, as well as dealing with allegations of clergy sexual abuse.

You can read that column here: https://www.dioceseofjoliet.org/bishop/content1.php?secid=110

What happens when an allegation of sexual abuse against a minor is made against a Diocese of Joliet clergy member?

(Please report any allegations of sexual abuse against a minor to Leah Heffernan, director of the Office of Child and Youth Protection, at lheffernan@dioceseofjoliet.org or 815-221-6116.)

o The same investigative process is followed when the accused priest or deacon is deceased or already listed on the diocesan list of credible allegations of sexual misconduct with minors.

o If the priest or deacon is in active ministry, he is removed while the investigation is ongoing and advised of his right to counsel.

o The Charter requires this panel to be composed of a majority of lay people not employed by the diocese and to include a pastor and a person with expertise in the treatment of minors who have been sexually abused.

o When the allegation is found to be unsubstantiated, the cleric is returned to active ministry and steps are taken to restore his good name.

Where can I get information on clergy in the Diocese of Joliet who have credible allegations of sexual abuse against a minor?

In accordance with the Charter, the Joliet diocese maintains a list of clergy who have been determined to have a credible allegation on its website: www.dioceseofjoliet.org. A graphic in the lower-left hand corner of the home page links to the page of the Office of Child and Youth Protection: https://www.dioceseofjoliet.org/ct/sectioncontent.php?secid=13

A list of priests with credible allegations can be found at this link: https://www.dioceseofjoliet.org/siteimages/chancerytribunal/OYCP/PRIESTS_WITH_CREDIBLE _ALLEGATION_5-13-2022.pdf
The list was first published on April 9, 2006, and was most recently revised on May 13, 2022.

It should be noted this list contains the names of priests who are deceased, as well as those priests who belong to religious orders.

When was the most recent time a name was placed on the list? 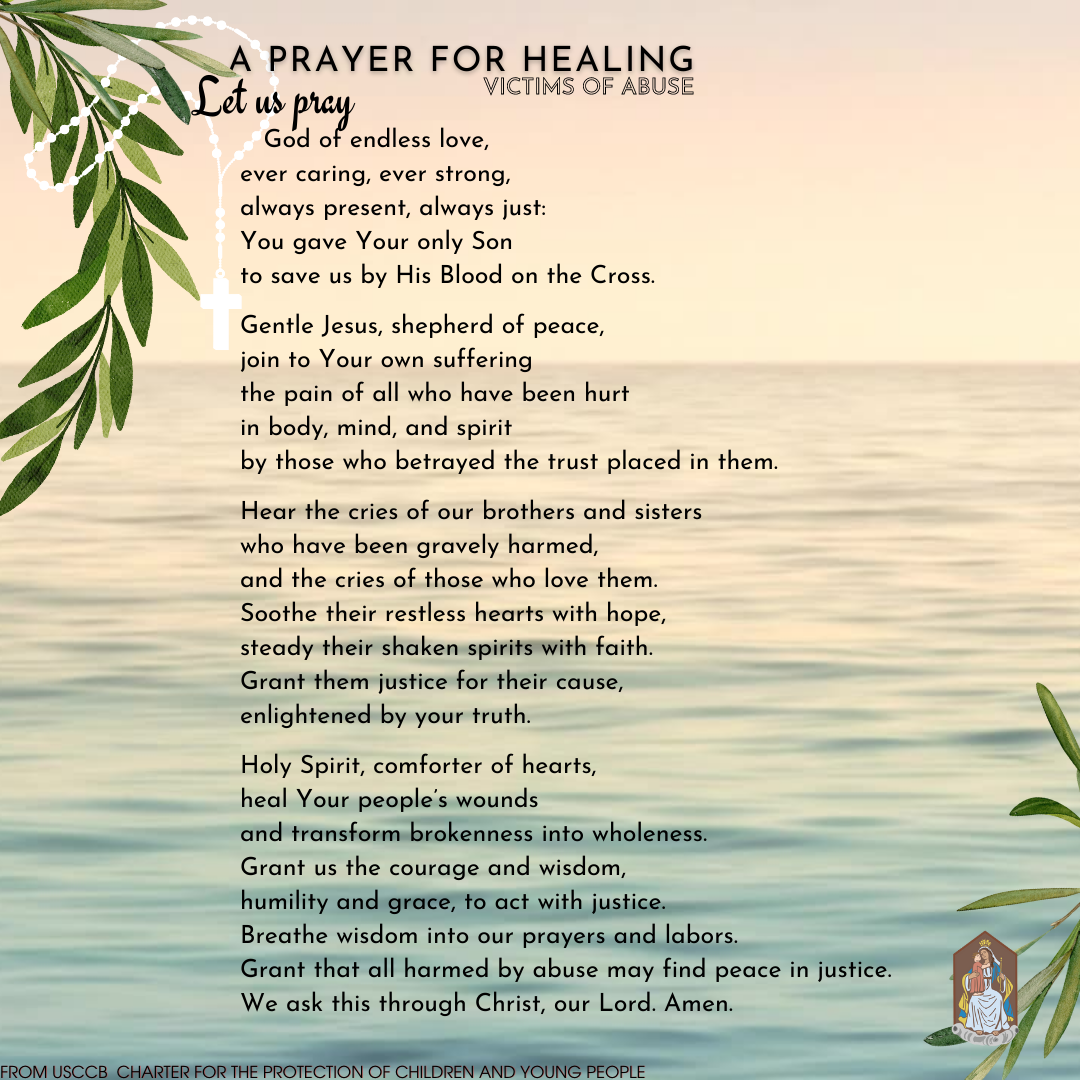